Recently by the same author:

At this conference there will be two zones. The Blue Zone will be secure with restricted access; the Green Zone will have free public access. Ian MacFarlane has been leading an application to the UK Cabinet Office for two pitches, one in each zone. For the Blue Zone we have asked for four hours for lectures/presentations or panel discussions. For the Green Zone we have applied for a stand, 2m x 2m, where we can engage members of the public, eye to eye, offer brief handouts and explain the case for nuclear power. Ian has made our application in collaboration with other groups, in particular Atomic Advocates UK based on membership of a Facebook group and Friends of Nuclear Energy a group of younger professionals who have contributed many ideas. We will not know until May what allocation we have been given and until then our plans are speculative. However, it is clear that to provide adequate know-how for a Green Zone stand for 12 days will be demanding. Please would all SONE members who might be able to come for a period put the dates in their diary, just in case. Expertise will be less important than enthusiasm and personal conviction.

Oh, not the story of Renewables again!

The message may get tedious but it has to be repeated. I admit that my friends and relatives have heard enough. But my MP needs to hear it again.

[Incidentally, click here to see a new documentary and discussion (20/3/2021) between Dutch and German engineers and others about the Energiewende, the German story of political ideology and scientific blindness.]

Unless there is a massive roll-out of nuclear in UK and elsewhere, when there is no wind and no solar, there will be no electricity without relying on carbon (fossil and biofuels). After 2050 that means, not just blackouts, but grid collapse, a paralysis that would recur frequently.

Look at this UK data for just a few days ago, 2nd March: 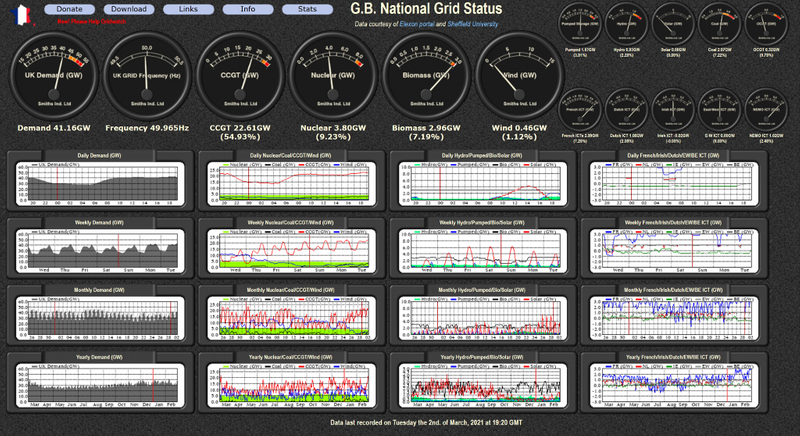 Without carbon (gas, coal, biofuel) would lose 70.1%.
Without imported energy would lose another 12.3%.
Boris Johnson’s promised 4x offshore wind energy would have provided a gain 4% on this day.

Conclusion In 2050 even with 4x offshore wind, without gas and without a massive rollout of nuclear in the 2040s, the UK grid will frequently be off – meaning no light, power, industry, heating, water, sewerage, internet.

What is UK Government policy? Maximum exposure to Russia, it seems
– More interconnectors and imports – insecure and vulnerable;
– More offshore wind – unreliable and vulnerable – skittles for Putin;
– Gas imports – more carbon, insecure.
We should remember what happened in Texas in 2021. But that was just blackouts, not grid collapse as the UK is likely to suffer.

The decline of the UK nuclear fleet - age, disease or curtailment

Neville Chamberlain explains “Why the UK AGRs have to close down”

Well, the AGRs, like their forerunners, the Magnox stations, have in effect an enormous cylinder of graphite as their main core structure (approx. 15m diameter and 12m high). This core, together with the primary heat exchangers are enclosed in a radiation-shielding concrete box The graphite is essential to reflect and moderate the fission neutrons to sustain the nuclear reaction. It is a very efficient arrangement but, over time, the very high internal radiation levels and the thermal cycling of the reactor with shutdowns for refuelling and maintenance, causes distortion and faults in the graphite blocks that make up the reactor core. Cracks have been observed in the graphite which may weaken the structure of the core. Moreover, the channels in the graphite, which allow movement of the control rods and the change of fuel stacks, are becoming distorted; this would eventually inhibit the operator’s ability to maintain stable operation or effect rapid shutdown if ever needed. Moreover, the steel heat exchangers, which operate at around 500 deg C, are showing signs of degradation.

So, although the AGRs have operated well during their design life and beyond, regularly supplying 15 to 20% of our electricity (60% in Scotland !), there is no prospect of further significant life extension. It is just not a credible proposition to re-engineer the cores to repair or replace the graphite or to access and replace the heat exchangers. This is in contrast to the light water reactors, such as the Pressurised Water Reactors, widely in use in the USA and, of course, in Sizewell B. These reactors do not use graphite cores and rely on the water contained in the massive steel reactor vessel to provide neutron moderation. All the life-limiting features of these reactors are accessible and replaceable, so life extension is much more feasible.

In a very few years, Sizewell B will be Britain’s only running nuclear power plant, until the commissioning of Hinkley Point C and, perhaps, many years hence, Sizewell C, maybe even Bradwell B and Wylfa Newydd, and some new generation Small Modular Reactor stations.

Until then, with limited (albeit extensive) scope for intermittent wind and solar, how will we keep the lights on without burning fossil fuel? We should all ask our MPs!

So for the UK AGRs, the problem is ageing graphite, but for PWRs and all future reactors, components should generally be replaceable. Such nuclear plants can be maintained and licenced to operate safely for 80 years and more. This should be true for Sizewell B. Anyway, we should not accept nuclear plants and their output being curtailed to make way for the fluctuating output of intermittent renewables.

Burial sites for wind turbines – and at so young an age!

Welcome To The Wind Turbine Graveyard near Casper, Wyoming 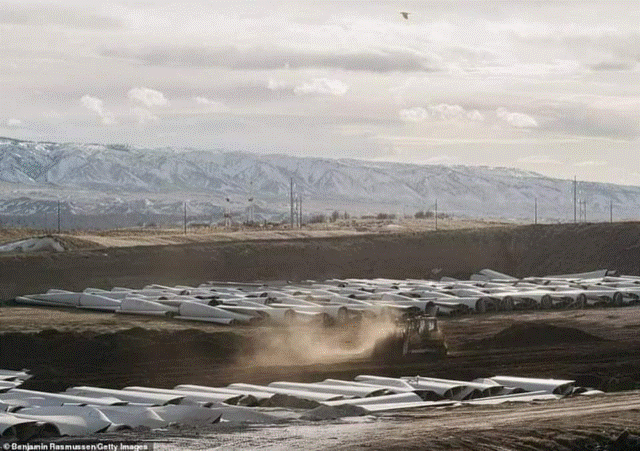 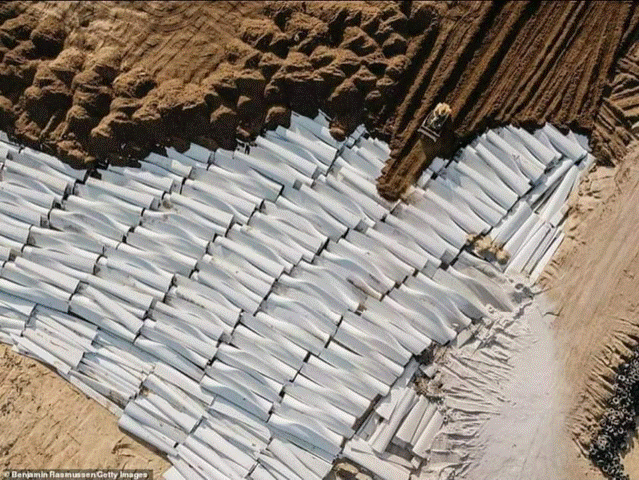 So much for clean power – note the size of the bulldozer burying the blades in comparison to the blades. This wind turbine graveyard stretches a few hundred meters from a bend in the North Platte River in Wyoming.

Between last September and this March, this graveyard will become the final resting place for 1,000 fibreglass turbine blades that never deteriorate, not being biodegradable. These blades, which have reached the end of their 25-year working lives, come from three wind farms in the north-western US state. Each is cut into three pieces, then the pieces are stacked and buried.

Turbines from the first great 1990s wave of wind power are reaching the end of their life expectancy today. About two GigaWatts worth of turbines will be refitted in 2019 and 2020. And disposing of them in an environmentally friendly way is a growing problem. Other states – California, Colorado, Kansas – are doing the same.

[Where do such old blades go in the UK?
Another question for your renewable-happy MP!]

Engaging the doubters of climate change

Try walking them back from the brink, step by step:

The world isn’t warming, but look at the vanishing ice-cover in the Arctic and melting glaciers, too.

But the sea level isn’t rising, not much yet because floating ice does not contribute, but ice from Greenland and Antarctica would, and then you will see – too late!

OK, it’s warming, but that’s happened before. It’s not due to human activity, For 12,000 years the climate did not change much until very recently as the CO2 increased.

If it is human activity we can solve the problem with wind and solar, But Germany has tried that and failed. Now they depend on neighbours and Russian gas.

Well, wind and solar are okay, if nuclear is “part of the mix”, like in Texas, California? The unpredictable disruption by wind/solar fluctuations is avoided by having enough nuclear.

So nuclear can do it all, but we need the safety of Generation 4, No, the timescale of “net zero” is such that we cannot wait. We need existing nuclear plants, new “shovel ready” plants of existing designs plus Generation 4. The record shows they are all safe.

Is nuclear the whole story? No, there are all the add-ons: the direct heat for industry and district heating, the cheap off-peak hydrogen for steel, transport, domestic heating/cooking, the desalination for clean water, LED lighting and heat for 24/7/365 anywhere indoor agriculture with communities based on SMRs.

Where can I invest in this? It will take 30 years of private, pension fund and government investment. And also much education and re-education to recover from the antinuclear and radiation phobia that still controls opinion – a cultural scar left by the Cold War. The antivax-like sentiment should be overcome.

Only then will they say “But what about the waste?” See the February Newletter.

Making the case for nuclear power in Japan and South Korea

An interview was released in Tokyo on the 10th anniversary of the Fukushima Daiichi accident.

The first half of the video is a tutorial recorded in 2014; the second half is a recent interview that challenges the Japanese audience to put horror aside and rethink Fukushima – and Hiroshima too – with a historical eye. In its first week it was watched by 13,000 of whom only 21 recorded a “dislike”. A translation of the 46 comments reveals considerable support for nuclear power. Contacts in Japan hope to use this video to give further political heft to the case for restarting their idle plants and planning new ones.

On the same day a Korean translation of Radiation and Reason was published in Seoul. The South Korean government opposes nuclear power despite their successful nuclear industry which has supplied plants to UAE.

A letter in the Financial Times 16 March

Most political commentators know little of the natural science of energy. They are too easily impressed by renewables and have a simple trust that technology will deliver a solution to any problem if innovators try hard enough, for instance in the development of large scale solutions tp grid batteries and carbon capture. At the same time they are culturally inhibited from mentioning nuclear power.

Any submission to set matters straight seldom finds favour with editors. However, on 16 March a letter was published in the Financial Times that concludes with the statement “With education, nuclear technology can provide the environmental, cheap, resilient, safe, flexible and secure energy the world needs to survive climate change”. The text may be read by clicking here.

An article by Dominic Lawson in the Sunday Times 14 March

The worst fallout from Fukushima was hysteria,
Merkel’s hasty rejection of nuclear energy looks more unwise than ever

This (click here) is an unusually positive and well informed article. It contains nothing new, but he wrote it and has understood!

Before leaving the anniversary I should recommend reading an unforgettable and moving book Ghosts of the Tsunami by Richard Lloyd Parry, ISBN 9781911214175.

SONE Members might also read what I wrote about Fukushima on 26 March, ten years ago, click here. The story was already obvious after those few days to an individual, perhaps, but committees take years to report.