This month the world turned upside down and as a result this Newsletter is late. A poor excuse, perhaps, but I hope that Members will find the items below stimulating and in some cases encouraging. Of course the choice is personal, but includes important points of view not readily found elsewhere.

Hope, aspirations and developments in the United States

President Biden deserves all the help we can give him, and prayers too. Professionally we can push the global civil nuclear agenda. In December I was invited to take the lead in promoting the case for nuclear energy at a discussion group for investors, Top Tier Impact, on the subject “Why and how nuclear energy is central to reaching net zero”. My written submission is here. As a result of the discussion they have published an article in Washington DC and just issued a press release.

It will take a few more years for the political consensus to realise that, not only are fossil fuels out, but “renewables” are not a viable long term replacement. Some in US with responsibility to delivery electrical power know that, unless something new turns up, the future will rely on nuclear. “We are not prepared to say it’s going to be a future of 100% renewables. Because as the person who has to make it work, we don’t know how to make that work today. Our customers don’t want intermittent power.”

While opinion changes, some early technological developments are required. The US Department of Energy has announced backing for five projects. One of these is the Terrapower Molten Salt Reactor. However, this is only one design of MSR. There are others, such as the Moltex Reactor that Ian Scott told us about at the 2019 SONE AGM. A link to the latest news of this British project (lacking UK Government support but under development in Canada) is given later in this Newsletter.

Predicting the end of a terrible German fairy tale

German folklore specialises in witches and woodchoppers in the forest. They play their part in the horror story of Energiewende as it nears its ghastly end. This may be predictable but is still not acknowledged by most of the science-blind Green idealogues who control energy politics in the EU. Determined to close nuclear plants for ideological reasons and coal plants for environmental reasons, they put their faith in renewables. For several days, even weeks, each year the sun does not shine and the wind does not blow. But for their generous neighbours and the international woodchoppers, identifiable as French nuclear power and forest destruction at home and abroad, they would have no energy. In the short term they will depend on Russian gas, and in the medium term too, thanks to NordStream2.

At last, in an article “Natural Gas is a Bridge to Nowhere” the Energiewende movement has recognised the wicked witch! As the woodchopper lays waste the forest, the nuclear plants close, the coal plants too, Germany will suffer prolonged electricity cuts, several times a year. That nearly happened on January 7/8 2021, but in future it will become normal in Germany and other countries that put their faith in wind, witches and woodchoppers.

But this is not to say the UK is well placed. We are massively dependent on gas; we import 4 GW of electricity from the EU; we have the know-how to build nuclear power stations for ourselves and others, but we have a science-blind political and financial structure that has lacked the confidence to make it happen.

A cautionary tale from South Korea – and Arizona and Liverpool, too

Most enthusiasts for wind and solar would love a technology that offered an electrical mega battery capable of storing renewable energy for a week, or even just a day. To the investor press a battery is a seductive idea – just put your surplus energy in and take it out when you need it! There are two problems, the capacity of the battery and the ease with which you can get the energy out again. If you can store a large quantity of energy and get it out easily, then a battery is essentially a bomb. It does not have to be wired or be provided with a detonator because it’s already wired. What energy should a fully charged grid-scale battery hold? At 30 GW the UK grid provides an energy of one terawatt-hour in a day, equivalent to the energy of a thousand bombs of the size that exploded recently in Beirut. Enthusiasts for grid-scale batteries should beware what they wish for!

The health and safety authorities do not yet seem aware of the dangers. Here is a recent report from South Korea about twenty fires at energy storage units in the past year. The Korean Government officials are said to have no clue as to what happened.

“An investigation into the cause of an explosion at an Arizona energy storage facility that injured four firefighters confirms what engineers had feared: Packing lithium-ion batteries tightly together can spark a chain reaction that can cause catastrophic damage and endanger lives. Arizona Public Service is holding off on its plan to aggressively expand battery storage capacity while its suppliers draw up new plans that will reduce the risk of similar accidents.”

Less than a week later there was a report from Liverpool, “There has been a fire at the Carnegie Road 20MW battery energy storage system (BESS) project in Liverpool, England, project owner Ørsted has confirmed. Merseyside Fire & Rescue Service … arrived to find a large grid battery system container well alight”. As so often, the capacity of the battery in MW-hours is not given – perhaps because it is too small to bridge the intermittency of renewables and too large to be safe. The danger gets compounded by the lack of scientific transparency and is not openly acknowledged until there is a fire or explosion.. 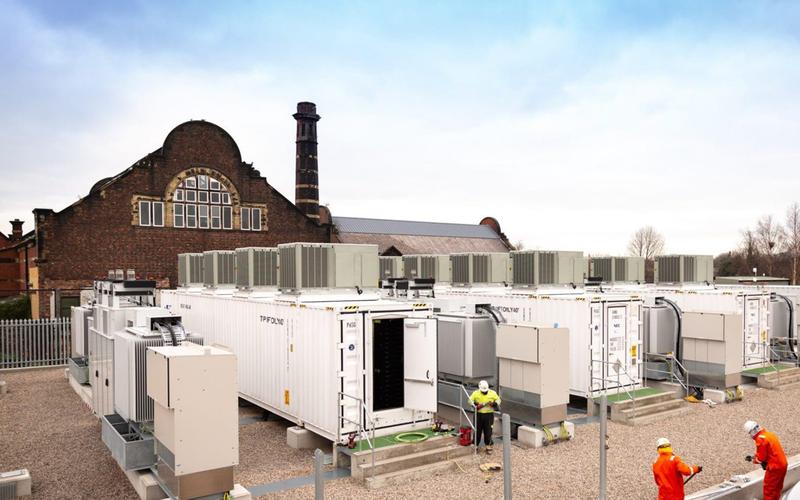 Carnegie Road BESS in Liverpool, UK, as it looked when completed in early 2019. Image: Ørsted

The laws of chemistry limit the energy density of batteries. A modern Lithium battery has an energy density when charged of about 1 Mega-joule per kg. So the UK “day-battery” would require several million tons of battery, as unrealisable and unaffordable as dangerous. Having moved from lead-acid to lithium there is little further progress to be made by using lighter electrodes. The Periodic Table cannot be extended by investment. The limit is a hydrogen fuel-cell.

So little progress on mega-batteries is likely, but battery accidents, plus belated safety regulations with insurance and related costs, certainly are predicted. A grid-scale electrical mega-battery is not a dream to ensure the viability of renewables, but an unrealisable nightmare.

An online lecture to students at Oxford

After some delay in scheduling I was pleased to give a full online lecture to the Oxford University Scientific Society entitled “Only by adopting nuclear energy can mankind hope to survive climate change”. There were questions and answers at the end, although it was disappointing how these followed the same oft-repeated sequence. We may hope that as the public at large, including students, learn more and the subject becomes mainstream in the next few years, their questions will get fresher and more challenging. It’s their future at stake.

Anniversaries can be an excuse for the media to re-use old material. However, I have accepted an invitation to re-examine the lessons learnt, or not learnt, as a result of the accident at Fukushima Daiichi ten years ago in March. The invitation comes from like-minded friends in Japan. I shall include my essay in a later Newsletter.

Over six years ago I gave a press conference at the Foreign Correspondents Club of Japan on the subject “The Fukushima nuclear accident and the unwarranted fear of low-dose radiation”. Its forthright message was not welcomed at that time by the world media present and they failed to report it. Nevertheless, it remains true that Japan will have to re-embrace nuclear power if it is to reach the necessary carbon targets. As a result of Covid19 popular attitudes to the future and the importance of science are changing around the world, hopefully for the better.

In some of its uses the chemistry of carbon itself plays a crucial role. It is encouraging to read that carbon might be replaced by hydrogen as a reducing agent, as well as a fuel, in steel making. Here is an account of developments in that direction being pioneered in Sweden. Swedish company HYBRIT (owned by steelmaker SSAB, state-owned utility Vattenfall and miner LKAB) began test operations at a pilot “fossil-free” steel-making plant on August 31st. At present it would be uneconomic, but for a carbon-free future and with hydrogen from a local SMR it could become very important.

Dr Ian Scott gives an update on changes to the design of the Moltex SSR-W “Wasteburner” in the light of feedback from regulators and operator input from New Brunswick Power, Canada. A longer video is here. The significant change is that the SSR-W now has a cylindrical geometry with a standard 500 MWe output. Moltex still intends to follow the fluctuating output from renewables. I think that will turn out to be a mistake. I should write an article explaining how it might be better to run a reactor steadily near peak demand with off-peak output used for hydrogen production and desalination. In 30-40 years time there will be no interest in renewables connected to the frid.

In the December Newsletter I described how Climate Change is accelerated by the darkening of the Earth’s albedo. There are further mechanisms that magnify the change once it get started. The release of carbon frozen in the permafrost is another dominant one. This is described here by James Hansen in an article that also stresses how careful most scientists are not to exaggerate the import of their findings. That gives a false impression where the individual phenomena themselves tend to magnify the effect of one another. This applies to the albedo and permafrost effects because they both give positive feedback to the effect of the initial increase of greenhouse gases. A professional reluctance to advise panic and a tendence to qualify evidence by alternative, but unlikely, explanations can hide the gravity of the situation. The only reasonable solution is for everybody who can to study the evidence carefully and reach their own conclusion. Only then may preparations be made to mitigate the severe social and economic consequences expected. But few in society are doing that, most remain unaware of what is likely to happen, and to maintain social acceptance no such plans are being made.

In the next Newsletter we will outline how SONE might contribute its voice at the COP26 Meeting that the UK will host in Glasgow next November. In the mean time here is a plot of the changing world temperature. But there is so much more to the story – the desertification of land, the loss of forests, the acidification of the sea and the inevitable destabilising socio-economic consequences. 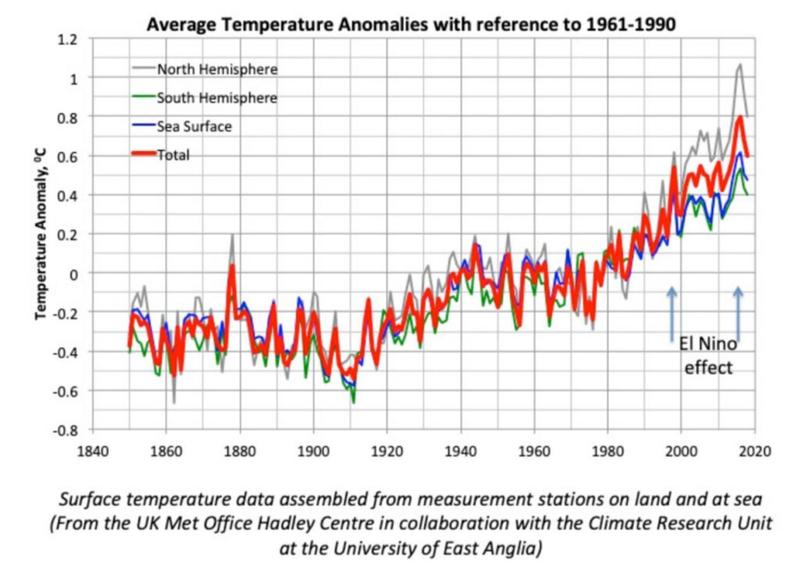